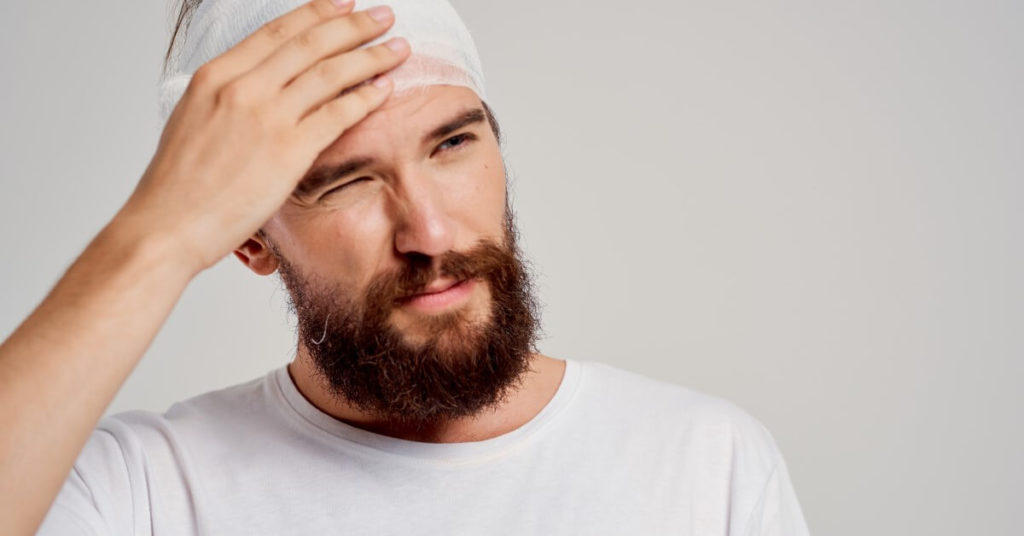 Sleeping problems, like insomnia and hypersomnia, are common complaints in brain trauma victims. But how can head trauma result in chronic sleep disturbances?

Brain injuries are known to cause changes in mood, memory, and learning abilities, in addition to cognitive and emotional impairment.[1]

Researchers have also studied the direct and indirect association between head injuries and sleep difficulties.

Severe trauma to the head can disrupt the glymphatic brain system’s functions, resulting in the toxic buildup of amyloid-ꞵ and T-protein and, consequently, hypersomnia.

Moreover, a severe traumatic head injury can decrease the release of wake-promoting neurotransmitters, such as hypocretin and histamine, resulting in increased sleepiness or narcolepsy.

Conversely, an injury to a different part of the brain can stimulate the release of glutamate, which causes difficulty in initiating or maintaining sleep, known as insomnia.

Continue reading to learn more about common sleep disturbances following head trauma and how a traumatic brain injury can disturb your sleeping patterns.


The Pathophysiology Of Head Trauma

A concussion or head trauma can disrupt the brain’s normal functioning and result in what is known as a traumatic brain injury (TBI).[1]

A brain injury can happen due to the sudden acceleration, deceleration, or rotation of the head during a motor vehicle accident, falling, contact sports, assaults, and explosions.[1]

A blow, bump, or jolt to the head can damage its internal tissues and blood vessels, leading to bruising, internal bleeding, or brain swelling.[2]

Alterations in the normal brain functions after head trauma may manifest as:[3]

The link between head injury and sleep difficulties has not been studied extensively. However, difficulty initiating and maintaining sleep is a common complaint in patients with a traumatic brain injury.[1]

Despite their high prevalence, sleep disorders remain an under-recognized consequence of a brain injury.

Around 46 percent of patients suffer some form of sleep disorder following a TBI, including: [3]

Severe head trauma can injure different locations in the brain, including sleep-regulating brain regions such as the hypothalamus, thalamus, amygdala, brain stem, and pineal gland.[3] The type of sleep disorder resulting from a brain injury depends on the injury site within the brain.

The hypothalamus in your brain is a key player in regulating sleep and wakefulness. It secretes neuropeptides called hypocretins or orexins.[4]

Studies have shown that these neuropeptides increase wakefulness from either REM or NREM and are absent in the brains of some narcoleptic patients (patients who find it hard to stay awake).[5]

Moreover, the hypothalamus releases histamine neurons which promote wakefulness and arousal from sleep.[6]

Furthermore, glutamate, another neurotransmitter in the brain, affects sleep regulation. The levels of glutamate are the highest during REM sleep or when you’re awake.[8]

Additionally, the glymphatic system is a waste-clearing system in the brain. It’s responsible for removing proteins, such as amyloid-ꞵ and T-protein, from the central nervous system and preventing their toxic buildup in the brain.[3]

Slow-wave sleep, a vital sleep phase, helps clear amyloid-ꞵ and T-protein by the brain’s glymphatic system. As a result, sleep deprivation can lead to the toxic accumulation of these two proteins in the brain. Vice versa, the buildup of T-protein and amyloid-ꞵ can disrupt the slow-wave sleep phase.[9]


What’s The Link Between Head Trauma And Sleep?

Other indirect factors can contribute to the development of sleep problems after a severe traumatic head injury, including:

Sleep disturbances can slow down the healing process and interfere with the ability of the patient to regain cognitive function after head trauma.