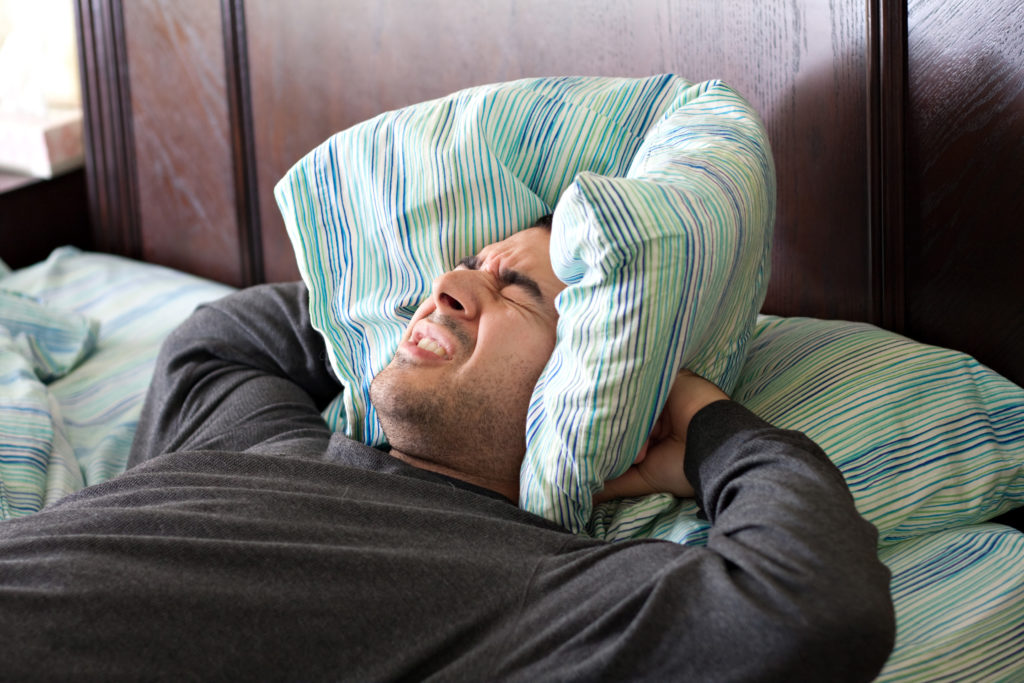 What Is Exploding Head Syndrome (EHS)? | What’s the Sensation of EHS? |
What Causes EHS? | How Common Is EHS? | Diagnoses | Treatment |
Can the Frequency of EHS be Reduced? | Is EHS Dangerous?

Exploding Head Syndrome (EHS) is a type of sleep disorder. During an EHS episode, you hear a loud sound or explosion in the head as you fall asleep or one that wakes you up at night.

Although it sounds ominous, EHS is a harmless, painless condition and is not a symptom of an underlying dangerous health condition.

Read on to learn more about EHS, why it happens, and what you should do if you wake up suddenly because you hear a loud noise or explosion in your head.


What Is Exploding Head Syndrome (EHS)?

Exploding Head Syndrome (EHS) is a sleep disorder characterized by hearing a loud imaginary sound similar to an explosion while starting to fall asleep or as you wake up.[1]

Many people wonder whether EHS is real. It’s a real disorder, yet, the loud noise that jolts you awake from sleep isn’t real or heard by anyone else.[1]

People who experience episodes of EHS wake up abruptly from sleep because of the crashing noise. However, these events are painless and seemingly harmless.

This sleep disturbance, less commonly referred to as episodic cranial shock, is a type of sensory parasomnia, abnormal and undesirable sensory events experienced during sleep.

The first cases of EHS were described in 1876.[2] However, it wasn’t until 2005 that EHS became classified as a sleeping disorder.[3] 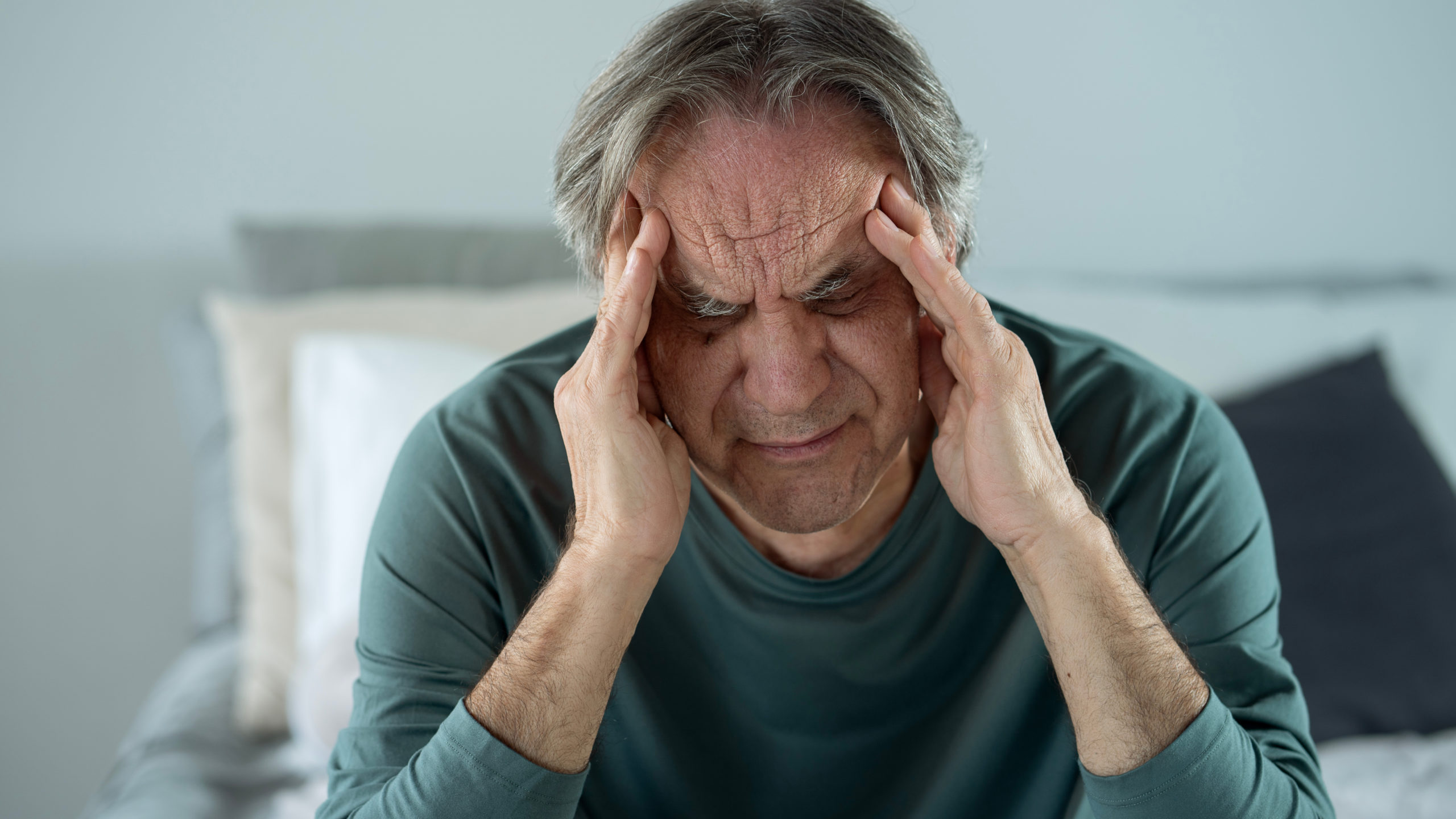 What’s the Sensation of EHS?

You can experience EHS while awake as you drift to sleep. Otherwise, the loud crashing sounds can wake you up from sleep.

Episodes of EHS are usually painless but can be frightening to the individuals experiencing them, especially if they’re unaware of the nature of this condition.

People who experience episodes of EHS describe the loud noise as explosions, gunshots, thunder, crashes, or other thunderous sounds.[4] An episode of EHS generally lasts less than a second and can occur along with flashes of light, muscle jerks, and feelings of distress.[5]

The frequency of EHS episodes varies from one person to another. Some people may experience one attack every few nights, while others may have several attacks during a single night. Moreover, the same person might experience episodes several nights in a row, followed by days, weeks, or even months without an attack.[6]

Scientists still need to find out what exactly causes EHS; however, several theories have been proposed,[1] including:

● The brain abnormally processes external sounds during the sleep-wake transition, which can cause you to hear regular sounds around you as loud bangs while sleeping


How Common Is Exploding Head Syndrome?

Although the exact number of people with EHS is still unknown, recent studies show that this sleeping disorder is more common than previously thought.[7]

Several studies suggest that EHS is more common in females[8] and can affect people of all ages.

In one study, up to 16% of college students reported Exploding Head Syndrome events. So it’s not exactly a rare condition.[7]

Moreover, it appears that EHS is more common in people with sleep paralysis. Studies show that individuals with a history of sleep paralysis often report experiencing Exploding Head Syndrome symptoms at least once.[11]

EHS remains an under-reported and underdiagnosed syndrome due to several factors. Some patients may feel embarrassed about their symptoms because they hear sounds that aren’t there and might hesitate to tell anyone about them.

Others feel frightened after experiencing an episode and worry they may have an underlying serious health condition, such as a brain tumor, stroke, or brain hemorrhage. Nonetheless, EHS is harmless and not life-threatening.

Furthermore, not all healthcare providers are familiar with this condition or its diagnosis.

Make an appointment with a sleep specialist if you’re experiencing symptoms of EHS, such as waking up suddenly to a loud noise or an explosion in your head.

Currently, there’s no definitive diagnostic test for EHS. Instead, your sleep specialist can make a diagnosis based on the following clinical criteria:[7]

● You feel frightened or distressed after the episode

● You don’t experience any physical pain associated with the event

Your sleep disorder specialist might also ask whether you experienced any associated symptoms, such as flashing lights or muscle jerks. You may need to undergo specific tests to rule out other health conditions. The tests may include the following:

●    Magnetic resonance imaging (MRI) of the brain: A brain MRI helps your doctor search for swelling, bleeding, tumors, infections, and other diseases in the brain.

EHS is a benign condition that usually doesn’t require treatment. Nonetheless, recurring episodes can become very distressing for the individual experiencing them.

One of the best ways to manage EHS is by reassuring the patient that what they’re experiencing is not dangerous, harmful, or an indication of a serious health concern.[9]

Some authors suggest that reassurance can decrease the frequency of EHS episodes.[10] Treatment of anxiety could also reduce EHS attacks.[5]

There aren’t any drugs approved to treat Ehs; however, if the episodes become severely distressing, your healthcare provider may prescribe one of the following medications that have been effective in reducing symptoms of EHS in some instances,[1] including:

These drugs effectively reduced the frequency or intensity of EHS symptoms or entirely resolved the disorder in some patients.


Can the Frequency Of EHS be Reduced?

Talking to your healthcare provider about any factors triggering your EHS episodes is essential. The following steps can help you manage EHS and stop it from happening frequently:

● Treat any coexisting sleep disorders, such as sleep paralysis or sleep apnea

People with EHS have a good outlook. This condition isn’t necessarily bad or a sign of a dangerous health condition.[9]

The frequency and intensity of episodes can decrease after reassurance from your healthcare provider. With time, EHS can completely resolve.

Although EHS is nothing to worry about, it can be frightening to experience these episodes. Consult a sleep specialist if you suddenly wake up from sleep because you hear loud sounds or explosions in your head. Rest assured that EHS is not harmful and can go away with time.