The Truth Behind Sleep-Related Eating Disorders 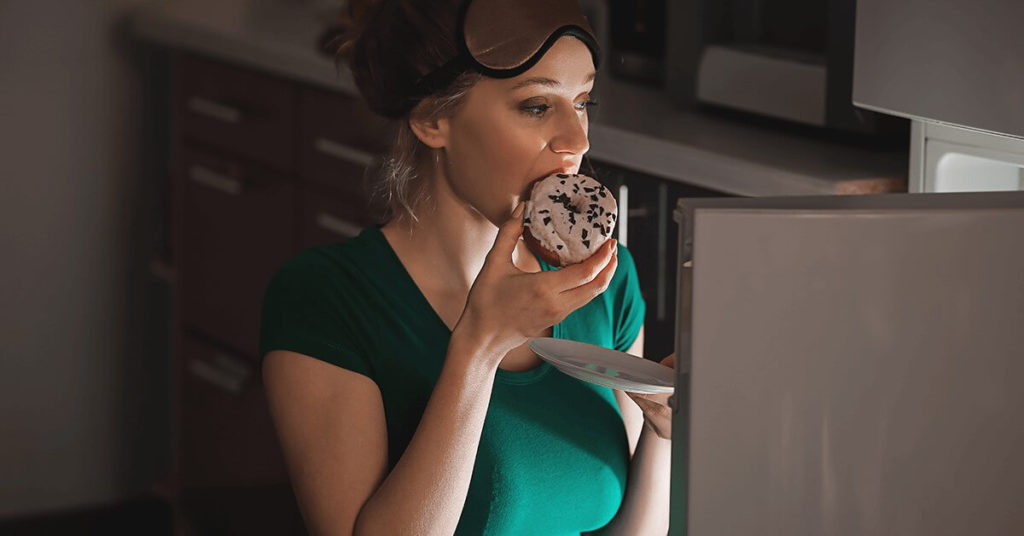 Sleep-related eating disorder (SRED), also known as sleep eating, refers to a condition in which you experience bouts of eating while asleep. During an episode, you engage in uncontrollable and unconscious eating and drinking.

SRED is a parasomnia and a form of sleepwalking that is doubly dangerous due to the threat of harmful falls and the consumption of toxic substances.

This condition also causes other adverse health effects that can strain your family and spousal relationships.[1]

Typically, these nocturnal events cannot be recalled in the morning. SRED may be resultant of numerous factors and has an intricate diagnostic scheme.

Thankfully, there are also numerous treatment modalities that can be employed to combat and overcome this condition.

SRED is often confused with nocturnal eating syndrome (NES); however, NES is an eating disorder with associated insomnia.[2]

In this article, we will examine the intricacies of SRED. We will explore its symptoms, epidemiology, causes, management, and more.

The diagnosis criteria for SRED is necessary, as it prevents you from receiving the wrong diagnosis. As earlier mentioned, you may display symptoms and behaviors that are similar to NES.

These characteristics that differentiate the two are essential. They ensure you get a correct diagnosis that facilitates appropriate treatment and a more rapid recovery.

The first case of SRED was recorded in 1991, and the experts, at that time, noted its similarities to NES.

Notwithstanding, they differentiated SRED by its partial or complete amnesia of eating episodes. There is also a high recurrence of awakening from slow-wave sleep, which led to SRED’s classification as a variant of NREM arousal parasomnia characterized by disruptive activities that occur while asleep.[3]

As we sleep, we pass through 4 sleep phases categorized as either NREM and REM. The majority of sleep disorders occur during NREM sleep.

Here is the criteria list put forward by the International Classification of Sleep Disorders, Second Edition (ICSD) to help you get an accurate diagnosis: 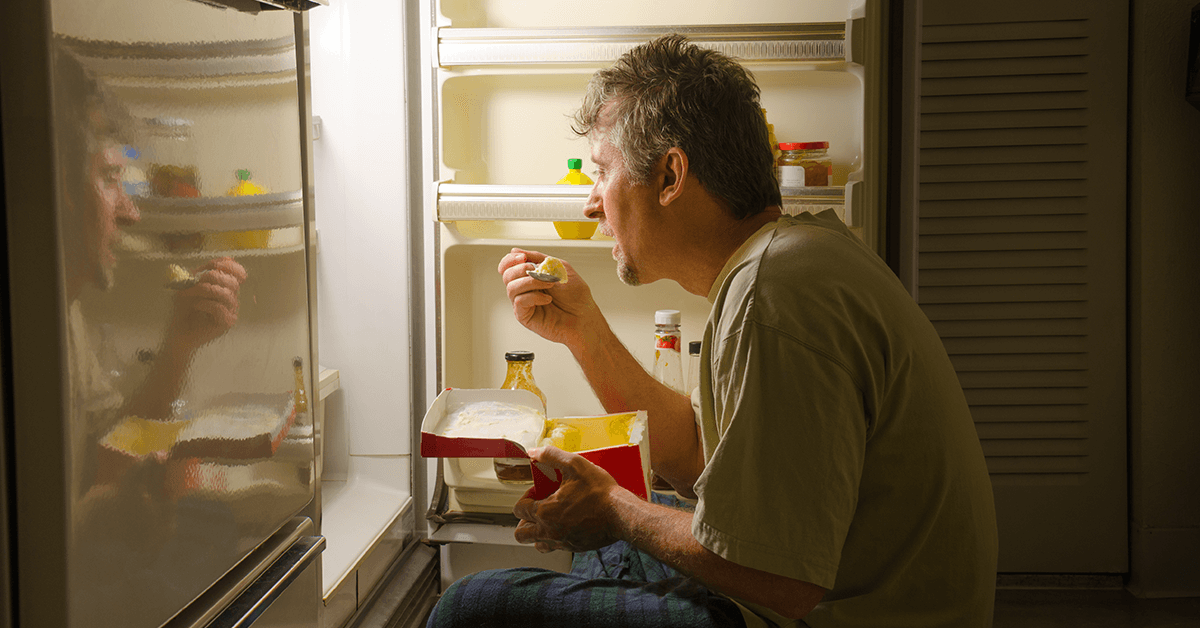 The primary manifestation you experience with SRED is eating after falling asleep with little to no recollection of what you did during these nocturnal episodes.

The signs and symptoms you describe and what your doctor sees are used to diagnose you with SRED. Many of these clinical manifestations are outlined in the criteria list above.

Varying triggers and factors can account for inducing these symptoms. In fact, according to a study published by the National Center for Biotechnology Information (NCBI), stressful events are associated with the onset of SRED symptoms.

Symptoms can help differentiate SRED from NES, including:

While SRED affects all genders, studies show that it occurs predominantly in females.

Approximately 60–83 percent of the participants in a clinical research review conducted by the Korean Society of Sleep Medicine (KSSM) were women.[5-8]

Also, young adults ranging from 20 to 30 years old are most likely to get diagnosed with SRED.

In another study, researchers detailed the prevalence of SRED as approximately 5 percent of the general population. Furthermore, just about 9-17 percent of persons with eating disorders have SRED.[2]

Both studies indicate that clinical manifestations for SRED can take upward of 10 years to become evident.

Research looking at the frequency of SRED in psychiatric and non-psychiatric populations determined it may be more prevalent than previously anticipated.

SRED is even more notable in people with a daytime eating disorder, like bulimia nervosa.

The researchers also concluded that the sleep disorder symptoms, such as difficulty falling or staying asleep, daytime fatigue, and a need to nap during the day usually occur due to sleep-related eating disorders that disrupt your sleep pattern and cycle.

When you do not sleep as well or as much as you need to, it affects your ability to function efficiently during the day.[9]

A differential diagnosis in healthcare refers to the possible diseases responsible for your signs and symptoms. The following conditions may have symptoms similar to SRED.

NES is an uncommon disorder delineated by both eating and sleeping dysfunctions.

People with this condition get up nightly to hurriedly eat enormous amounts of food before going back to sleep.

If you have NES, you typically remember the entire episode of consuming high-carbohydrate and sugar-filled foods.

These incidents can occur before you go to bed and result in weight gain along with other comorbidities.

NES is characterized by a delayed eating pattern and morning anorexia. These changes are a result of the massive food intake the night prior. Unfortunately, no standard diagnostic criteria for NES is currently available.[10]

Kleine-Levin syndrome is a condition characterized by periods of excessive sleep.

The amount of sleep can range from anywhere between 17-20 hours per day. If you have Kleine-Levin syndrome, you can expect to endure one or more of these associated symptoms:

KLS is more prevalent in adolescent males and affects approximately one to five persons per million people.[11]

SRDD refers to a group of syndromes that portray dissociative episodes during the sleep-wake cycle.

SRED connected to dissociative disorders occurs with different levels of awareness and wakefulness; however, symptoms may be more psychological than food-related.

SRDD primarily affects females, typically manifesting in the 20s and 40s; however, other age groups and genders can also be affected and are associated with binge eating at night.

As it relates to binge eating disorder and bulimia nervosa with SRED, the out-of-control eating continues throughout the day.

A study that included bulimia nervosa patients concluded that they did not describe nighttime arousals and had fewer eating incidents daily.

Also, these BN participants consumed nearly seven times more than what the night-eating subjects had consumed.[12]

Several factors can account for the onset of SRED, and they range from genetics, psychological, medications, and comorbidities.

After a few studies, researchers determined that your family history could play a role, which is at times a prominent one in your development of SRED. In one case, they highlighted a subject affected by SRED whose dad and twin sister were also diagnosed with the condition.

From a study titled “Clinical and Polysomnographic Features of Sleep-Related Eating Disorder,” researchers ascertained that stressful events are linked to the source of SRED’s clinical manifestations in about 16 percent of all cases.

Additionally, psychiatric conditions are generally present in persons with SRED. These include but are not limited to anxiety disorders.

In one study, researchers looked at the additional categories of sleep-related eating disorders and the current status of treatment. They followed 37 patients, of which, 70 percent gave a history of being treated with psychotropic drugs. In another study, the participants stated that they also used psychotropic drugs.[14]

Antidepressants or antipsychotics also are connected to inducing SRED. Sedative-hypnotics are the most common causes of sleep-related eating disorder onset.

Comorbidity suggests the presence of one or multiple diseases or medical conditions that exist simultaneously with another or others illnesses in an individual. Here are the typical comorbid conditions associated with SRED.

To diagnose the condition, a doctor performs a physical exam and asks several questions to link to each criterion.

At times, they may request that activities are recorded in a sleep diary or a sleep questionnaire be completed.

An additional test called video polysomnography may also be administered to identify characteristics of a sleep-related eating disorder.

Furthermore, one study looked at better defining the psychological, behavioral, and polysomnographic characteristics of SRED and NES. It reported that study participants with sleep-related eating disorders scored higher on the physical tension subscale, and mood and sleep subscale sleep questionnaires, namely the Sleep Disturbance Questionnaire and Night Eating Questionnaire, respectively.[14]

There are several ways healthcare providers may go about treating your sleep-related eating disorder, though management is usually dependent on the causative factor.

If SRED is linked to a sleep disorder, treating the primary condition should remedy the sleep-related eating disorder.

One treatment modality involves using medications, like selective serotonin reuptake inhibitors or topiramate to help control eating symptoms. In a trial conducted recently, topiramate at doses from 100 mg to 300 mg and clonazepam at 0.5-2.0 mg/day proved to be valid options to treat SRED effectively.[15]

Also, behavioral techniques, hypnotherapy, and psychotherapy are regarded as ineffective when used independently, but they can be used as an adjunct to other therapies.

Slowly tapering off hypnotic medications with the help of a doctor may be necessary as this class of drugs may induce SRED symptoms.[16]

A sleep-related eating disorder is a chronic condition that can lead to the disruption of your everyday life.

SRED can be dangerous, as it threatens your health and safety. It may also cause several non-communicable diseases.

It’s recommended that at the first sign of any symptoms, a doctor’s visit is made to facilitate early detection, diagnosis, and treatment.