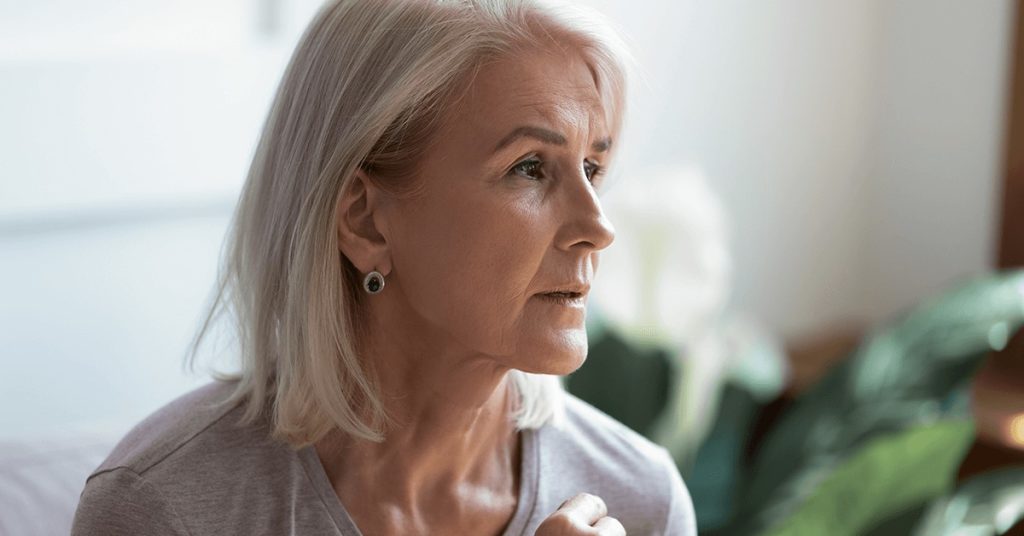 As you age, your sleep patterns change. It can be harder to fall asleep. Perhaps you wake up more often at night, and before dawn, you’re already wide awake.

For those in their senior years, the development of a circadian rhythm disorder, like advanced sleep-wake disorder, becomes more common, causing earlier than normal sleep and wake times.

Sleep is often lighter and fragmented, causing the slightest sleep disturbance. Scientists have attributed this fragile sleep to decreased REM or deep sleep duration, which can be a normal part of aging.

In addition to less deep sleep, seniors are also predisposed to develop a sleep disorder called REM sleep behavior disorder (RBD). It’s estimated that RBD affects 0.4-0.5% of seniors; however, the frequency is higher for those with neurodegenerative diseases, like dementia with Lewy bodies (DLB), Parkinson’s disease (PD), and multiple systems atrophy (MSA).[1]

Studies show that RBD is commonly linked to DLB, affecting up to 85 percent of individuals, often in the early stages of the disease.[2]

REM sleep is the 4th stage of the sleep cycle where we dream. Studies show that people who had less REM sleep (not caused by drug use or depression) in their younger years had a higher risk of developing dementia in old age.

RBD is a parasomnia, known as a disruptive sleep problem. Most times, people with RBD physically act out their dreams. Also, the severity of the behavior can range from mild body movements to violent punching, kicking, and thrashing. These movements can result in injuries to the patient or their bed partner.

One of the many distressing symptoms reported by caregivers of DLB patients is disturbed sleep, resulting from RBD symptoms. The loss of sleep is shown to contribute to or worsen the intensity of other dementia symptoms. 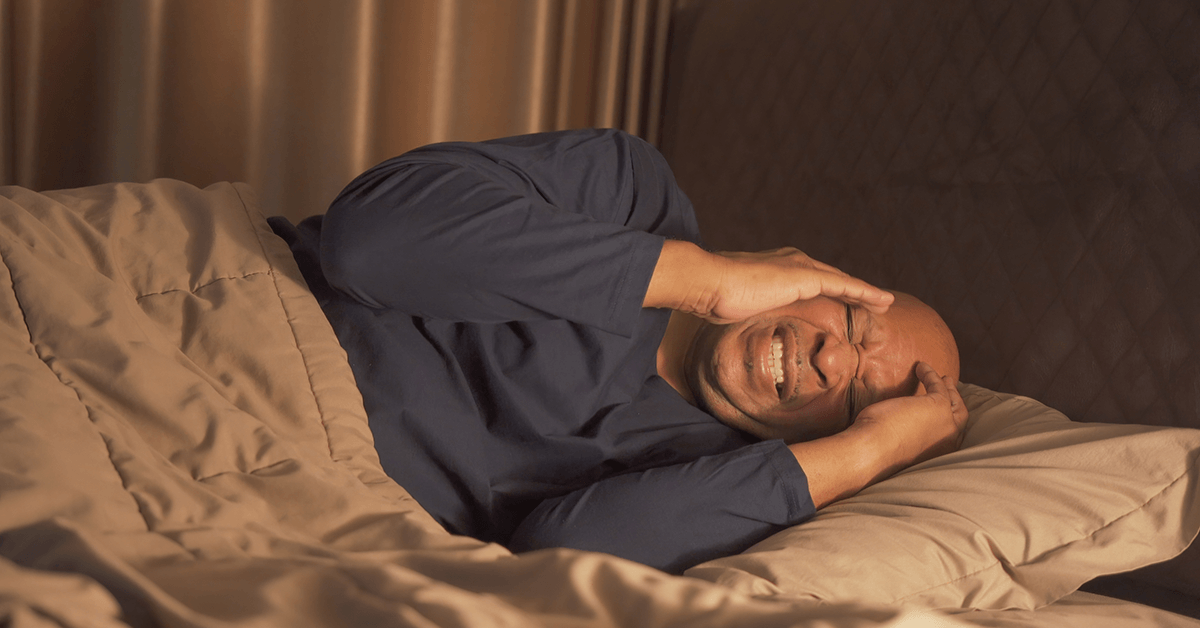 DLB is characterized by impaired thinking and reasoning, confusion, compromised visuospatial function, hallucinations, and sleep disorders with memory being affected in the disease’s later stages.[3]

Research shows that DLB is caused by pathological changes in the brain, which can overlap with other neurodegenerative diseases, like PD, MSA, and Alzheimer’s.

These changes are marked by cortical atrophy, involving the frontal, temporal, and partial lobes. Further cell degeneration is found in the limbic system, including the amygdala and cingulate gyrus.[4]

Studies show that symptoms of RBD can precede symptoms of DLB by as much as 20 years. What scientists aren’t clear about, for now, is whether insufficient REM sleep increases the risk of dementia or whether it is an early consequence that the disease process is already at work in the brain.[5]

PD is a nervous system disorder that is signified by tremors and muscle stiffness that significantly limits movement over time. Symptoms develop gradually and can lead to dementia, mostly affecting men over the age of 60 years.

Symptoms of RBD often manifest in the beginning stages of PD, signifying degeneration of the alpha-synuclein. The majority of patients exhibiting symptoms of RBD will eventually develop PD.

Studies show that RBD is a significant early predictor of PD. Nonmotor symptoms, like loss of smell and constipation, often occur with RBD due to manifestations of alpha-synuclein (a key protein) pathology in the olfactory bulb (the area of the forebrain that processes information regarding smells) and enteric plexus (nerves within the gastrointestinal tract).[6] Unfortunately, these symptoms are often overlooked during the first stages of diagnosis.

Another study shows that environmental and behavioral risk factors can predispose patients to develop RBD and PD. These patients are typically more likely to smoke; are less educated; abuse alcohol; are diagnosed with mood disorder; use antidepressants; report a history of traumatic brain injury; welding work; and pesticide exposure.[7]

Multiple-system atrophy (MSA) is a term used for a group of fatal neurodegenerative disorders that are characterized by autonomic dysfunction, affecting involuntary functions, like blood pressure, breathing, and motor control.

According to some studies, MSA affects both men and women equally; however, other studies show that MSA affects men up to nine times more frequently than women.[8][9]

Studies show that at least two-thirds of patients have RBD.[10][11] Symptoms of RBD may precede symptoms of MSA by several years, or even decades. [12][13] Patients with RBD are more likely to have autonomic dysfunction than symptoms of parkinsonism.[14]

Another common symptom of MSA is nocturnal or daytime stridor, a harsh vibrating noise that can be mistaken for snoring that affects between 15-40% of MSA patients.[15]

Your doctor must compare and contrast symptoms to determine if they are indicative of RBD. Other disorders aside, a definitive diagnosis of RBD can be made through a collection of data regarding sleep history or an in-clinic polysomnography test. The following is an overview of disorders that may be reviewed when making a diagnosis for RBD, including:

From surveys, the prevalence of RBD is estimated to be between 0.5-1% among the general populace, which translates to about 35-70 million patients worldwide.

Some of the surveys also pointed out that this figure may not be a true reflection of the number of cases because many RBD cases often go unrecognized and undiagnosed.[16] For seniors aged 60-99, the figure is estimated to be between 5-13%.

Another meta-analysis revealed that the chances of individuals with RBD developing neurodegenerative diseases within 5 years are 33.5%, 82.4% in 10.5 years, and 96.6% in 14 years.

Disturbed sleep and compromised sleep time are often correlated with chronic conditions and are not necessarily attributed to the aging process.[17-18]

It’s unclear whether disturbed sleep is part of developing dementia or if it’s a risk factor for cognitive decline and dementia.[19-21]

If you suspect you have RBD, clinical evaluation of the condition may include any or all the following:

.we3210A report from a sleep partner is beneficial as RBD patients may not be able to recall their sleep-related events. For a more definitive diagnosis, in-lab video polysomnography may be conducted on you.

Polysomnography is particularly helpful as it helps rule out other sleep-disrupting ailments, like nocturnal seizures, obstructive sleep apnea, and periodic limb movements.

Additional testing, like electroencephalography, neuropsychological batteries testing, and neuroimaging, may be performed if further evidence suggests the presence of a neurodegenerative disorder.[22]

Initial treatment of RBD should be done to ensure the affected person’s safety and their sleep partner. Weapons or sharp objects should be kept far away from the bed and nightstands.

It’s a good idea to pad the edges of tables or furniture or move them away from the bedside. The mattress should be placed on the floor or the bed set away from the window.

When RBD becomes extremely injurious, pharmacotherapy is administered. First-line treatments include melatonin (3 to 12 mg) and clonazepam (0.5 to 1.0 mg). Clonazepam can become a concern if used in older individuals because it can worsen cognitive functions, induce sleepiness and increase fall risk.[23]

Other treatments that can also be administered, but with limited efficacy, are rivastigmine, guetiapine, and donepezil.

What’s known is that more research is needed to get answers regarding the cause and effect of RBD and DLB. Further research could open new avenues of diagnosing, preventing or treating these disorders. If you suspect that you have RBD, talk to your doctor about your symptoms for a proper diagnosis.